The John Spalj Arena in the Hallett Center of Crosby draws 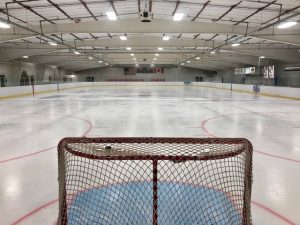 many people into the Cuyuna Range through ice hockey and special events.

The HCC Arena is equipped for five months of ice skating and ice hockey. It is the home to the Crosby-Ironton, Aitkin, Pequot Lakes Youth Hockey Association and Breezy Point Sports hockey tournaments, drawing teams and their families from all reaches of the mid-west.

The Hallett Center of Crosby operates the Lakes Area Hockey League for adults that include teams from Brainerd, Baxter, Crosslake, Pequot Lakes, and Aitkin. HCC also holds various Open Skating and Open Hockey sessions each week during the winter.

During the remaining months, the HCC Arena becomes a field house for activities such as basketball, hitting golf balls  and is the base for summer Kidz Kamp. It also has served as a convention center for special events, including:

Beside an NHL size 200’x85’ rink, the Arena is also equipped with a safe, rubberized year-round walking/running track for people of all ages.

Pickleball is available from March 1 to October 15. We have four courts striped for pickleball and equipment maybe checked out at the front desk.

For an additional fee, members can access the fitness center 24/7.